‘Brecht is the key figure of our time, and all theatre work today at some point starts or returns to his statements and achievements.’
Peter Brooke, theatre director. 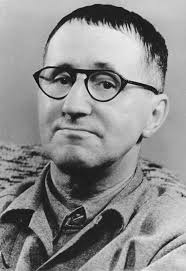 Bertolt Brecht was born in Germany in 1898 and died aged 58 in 1956. He was a poet, playwright and theatre director. His most famous plays include Life of Galileo, Mother Courage and Her Children and The Caucasian Chalk Circle. Brecht’s groundbreaking directing style has been hugely influential to many directors and designers over the decades. Playwright David Edgar once said ‘Brecht is part of the air we breathe.’

Brecht’s work was very popular in the 50s, 60s and 70s, but he is slightly less fashionable today. However his influence is still present in much of theatre and many would argue that Brecht changed the face of modern theatre.

Brecht was a Marxist and made his theatre highly political. He wanted his theatre to spark an interest in his audiences’ perception of the world. He did not want his audiences to sit passively and get lost in a show’s story, but to make them think and question the world they live in. He encouraged them to be critical of society. His work was often mischievous, provocative and ironic.

Brecht wanted his audiences to remain objective and unemotional during his plays so that they could make rational judgments about the political aspects of his work. To do this he invented a range of theatrical devices known as epic theatre.

Epic theatre is a type of political theatre that addresses contemporary issues, although later in Brecht’s life he preferred to call it dialectal theatre. Brecht believed classical approaches to theatre were escapist, and he was more interested in facts and reality rather than escapism. Epic theatre doesn’t attempt to lay down a tidy plot and story, but leaves issues unresolved, confronting the audience with sometimes uncomfortable questions.

Verfremdungseffekt, or the ‘estrangement effect,’ was used to distance the audience from the play and is sometimes called the alienation effect. Brecht did not want the audience to have any emotional attachment to his characters, so he did various things to break it. Here are some of the techniques he used.

This is where the wall between the audience and actors on stage is broken. Rather than allowing the audience to sit passively and get lost in the show, the actors will sometimes directly address the audience with a speech, comment or a question - breaking the fourth wall.

Short movie clips are put together, often to show factual events. Sometimes clips are edited to juxtapose each other, and/or sometimes the montages are used to highlight the issues Brecht is trying to communicate.

Some of Brecht’s work includes songs, music and dance. This helps to remind the audience that they are not watching real life. Sometimes the songs are juxtaposed ironically, with cheery upbeat music but with dark lyrics. One of the most famous song lyrics comes from Brecht’s ‘The Threepenny Opera’: ‘Who is the bigger criminal: he who robs a bank or he who founds one?’

Narration is used to remind the audience that they are watching a story. Sometimes the narrator will tell the audience what is about to happen in the story, before it happens, because if the audience knows the outcome then they may not get as emotionally involved.

Brecht believes the stage should be brightly lit at all times. That sets should not be realistic, just suggestive. And that actors should use minimal props, often only one per character. Also props can be used in several different ways, for example a suitcase may become a desk.

Actors will sometimes come out character, often at heightened moments of drama, to remind the audience that it is a piece of fiction that they are watching.

There are many other techniques he invented too, but these are some of his most famous.

Brecht has many admirers—and many critics. Some critics argue that to touch an audience deeply you need to affect them emotionally, which Brecht was opposed to doing. Others criticise Brecht because he was very opposed to corrupt post-war East Germany, but still accepted money from them to create his company the Berlin Ensemble. Theatre critic Michael Billington (who seems to admire Brecht as well as criticise him) wrote that Brecht, ‘was a shameless magpie who stole from everyone, often without acknowledgement.’

Whether you love, hate or feel indifferent toward him, Brecht was a creative, influential, controversial and often contradictory man who is still relevant to theatre today.