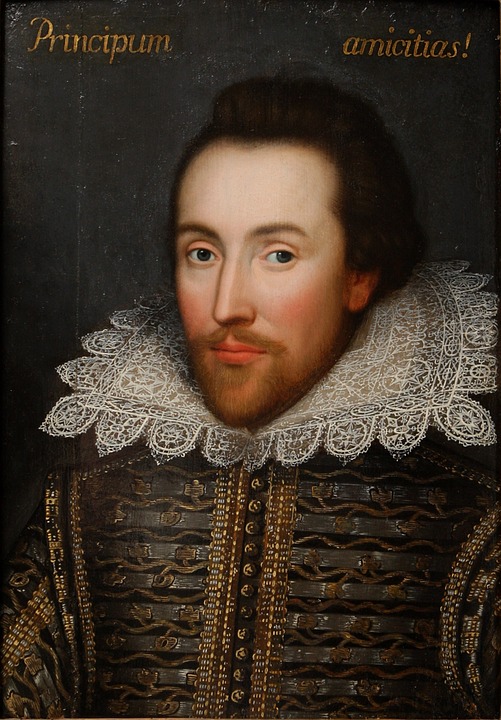 I had never performed Shakespeare until I auditioned for drama school at the age of 17, so it might come as a surprise that I have spent a lot of my professional career treading the boards performing the Bard. I'm an associate artist with Grassroots Shakespeare London and I've been working with them on and off for 4 years.

Grassroots Shakespeare London is an original practises company, working in a collaborative manner without a director. It's Shakespeare for everyone: revitalised and reimagined – exactly as Shakespeare would have had it.

I love Shakespeare. I love the language. I love the poetry.I love the stories. I love the characters. I love Performing Shakespeare!!!  What it boils down to is this: these plays are about human relationships and interactions and those haven’t changed in 400 years. And he's so sensible: he even gives you the stage directions in the text. No need for subtext either, these people wear their emotions on their sleeves. How brilliant! What a joy for an actor to have the opportunity to play these incredible characters who feel these huge human emotions to their full capacity. They love with all their heart. They hate with all their being. And what a gift to have it written in such beautiful language too!

But before I get carried away, I was asked to write this about performing Shakespeare, so I'll stop singing his praises and get to the how to’s, or rather how I approach it.

- Read it as many times as you can. Try and do it in one sitting, then you get the whole story in one go. Also you can understand your characters journey within that.

- Make sure you understand every word. I use Shakespeare's Words by the Crystals. It's a Shakespearean dictionary.. Sometimes words we use now had a different meaning during Shakespeare’s time. It's important to understand all the possible meanings of each word to make the best sense of the line. Crystals is a brilliant book: it has not only a dictionary with every possible interpretation of a word (with examples) it also has synopsise, character relationships and sections on clothing and other interesting things.

- I write every line in my own words. That's the only way I can be sure I am definite in knowing what a line means. This can all change in a rehearsal room but it's important to go into rehearsals with at least one idea (if not more!) of what is happening. I often write the other characters lines out too, then I can be sure I'm understanding the whole scene.

- If it doesn't make logical sense to stress a word or there's extra syllables then that means there's a change in the rhythm and that's just as important! To be or not to be that is the question. An extra syllable can signify confusion or emphasis, depending on whether the last syllable of the line is stressed or not.

- Hang on, there are less than 10 syllables in this line – what does that mean? So Shakespeare didn't actually write stage directions, but he leaves clues for us in the text as to what happens. Often if there's a gap then he's leaving us space for action: a kiss, a slap, a dance… Who knows? But the clues will be in the text. What is the character talking about before and after? What else has been happening in the scene? What's the relationship between the characters? It'll all be there and give you clues to the possible action.

- I think of it like a piece of music: each thought is a phrase, so even though it may be split into different bars (lines of iambic) it still flows through to the end of the phrase.

- Character relationships – who do they like/not like? And why?

- The best thing about Shakespeare is there is no subtext – because of asides (things spoken to the audience and not other actors) and soliloquies (monologues spoken directly to the audience) we constantly know what each character is thinking and feeling. We know if they're not speaking the truth because they'll tell the audience or another character later on in the play!

- Where have I been and where am I going? This is especially important with Grassroots as without a director this gives us a helping hand as to where the scene is set.

- Where am I in each scene? Where is the scene set?

- What do I want from the other person – what is my objective? What do I need? And how can I go about getting it? Which feeds into…

- I give every line an action – a verb that I can do to the other person. I think of it like this: the objective is the goal and the actions are the tactics I use to reach my goal. For example: in Twelfth Night Olivia wants Cesario (Viola in disguise) to find her attractive. Simplified: I want you to love me. The ways she could go about doing that would be: impressing, teasing, seducing, tickling etc. This makes the scene constantly about the other person which is so important.

With Grassroots the majority of this work is done before rehearsals even start – things may change when we get in the rehearsal room, but it's so important with a short rehearsal process to have a hit the ground running. What then happens in the rehearsal room becomes incredibly creative, as the homework has been done already. One of the things that I love about working in the collaborative way that Grassroots does, is how there isn't just one director, there are 10 directors. So much creativity in one room is brilliant. When you're struggling with one singular idea, you know that someone will always be able to have the answer for you or be able to make sense of things. We try everything once and make sure we have fun. It is a play after all.

For more information on Grassroots Shakespeare London then head to their website http://www.grassrootsshakespearelondon.com/, follow us on Twitter @grassrootsLON, Instagram @grassrootsshakespearelondon or find us on Facebook. We run workshops and have an great blog on all sort of things relating to Shakespeare. Head to the video page to have a look at our incredible Dawn til Dusk Periscope broadcast in association with GoPro, Twitter and Periscope for Shakespeare400.