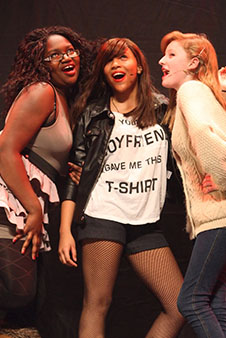 "I really was amazed by the talent on offer." Joseph Marcell, (Butler in fresh Prince of Bel Air), previous FGT judge 2013.

On Saturday 18 November 2017, the multiple award-winning Anna Fiorentini Theatre & Film School will be holding it’s fourth Fiorentini’s Got Talent Competition, which will see exceptionally talented students from Tower Hamlets, Hackney, Camden and Greenwich battle it out in front of a panel of highly acclaimed industry professionals.

However, this is more than just a talent show.

Year upon year the competition attracts the very best of the school’s emerging young talent, highlighting the driving force of young people within the arts. Previous winners include former student Jermain Jackman (2012), who later went on to win The Voice 2014.

Seven highly experienced and accomplished industry professionals will make up this year’s judging panel. They include Ali Bastien, best known for playing Becca in Channel 4’s Hollyoaks for which she won several awards including an ITV Soap Award. She then joined the regular cast of The Bill playing PC Sally Armstrong. She reached the semi final of Strictly Come Dancing and to this day remains the only celebrity to have received a perfect score in both the American Smooth and the Viennes Waltz.

Other judges include Fiorentini alumni, Tahj Miles, who has starred in Oliver!, Matilda and Bugsy Malone on the West End as well as in CBBC’s Class Dismissed and Jayden Jean-Paul-Denis, who is currently starring in Hank Zipzer.

A professional photographer will be taking photos on the night if you wish us to forward these on?

* Several students have gained leading roles on TV, Film and on the West End stage thanks to the Fiorentini Agency. These include Belinda Owusu (5 year contract with EastEnders playing Libby Fox), Orla Hill (child star in Song for Marion and Swallows & Amazons), Tahj Miles (Simba in the West End's The Lion King, Nipper in Oliver, and currently starring in CBBC's Class Dismissed), Jaden Oshenye (Fletcher in the West End's The Bodyguard playing alongside Beverley Knight) and Jayden Jean Paul-Denis (known for Hank Zipper). Former student and current ambassador Jermain Jackman won The Voice UK 2014 shortly after winning Fiorentini's Got Talent.

* The school has won 3 Business of London awards and in 2012 Anna Fiorentini won the Inspirational Leader/Business Person award for The Camden and Islington Business Awards.

* Celebrities who have either taught or been guest speakers at the school include Joseph Marcell (Butler in The Fresh Prince of Bel Air), Barbara Windsor, Christopher Biggins, Ashley Walters, Michelle Collins and Gaby Roslin.

* Students aged 7 - 18 follow a weekly time-table of drama, singing, dance and film all taught by leading industry professionals including Mark Short (choreographer to artists including Tina Turner and Peter Andre), Jacob Murray (former associate director of the prestigious Royal Exchange Manchester) and Jay Henry (a vocal coach for X Factor and The Voice who has worked with artists including Luthor Vandross, Stevie Wonder and Elton John).

* The Fiorentini Foundation, (charity number 1140414) was set up in 2011 to provide bursaries and scholarships for less privileged children that wish to access the school's training. Many recipients of these bursaries have gained leading professional work or have excelled in their academic studies due to an increased desire for learning.

* The Fiorentini Performance Troupe, which is the face of the charity, performs in local hospitals, care homes, homes for the elderly and at various corporate events.

* The school is not a franchise but has branches in Tower Hamlets, Hackney, Greenwich and Camden.

If you are aged between 4 - 18 years old and want to participate in the performing arts but struggle to find the fees, then there could be a place for you on the Bursary Scheme at the Camden, Hackney, Docklands or Greenwich Schools.