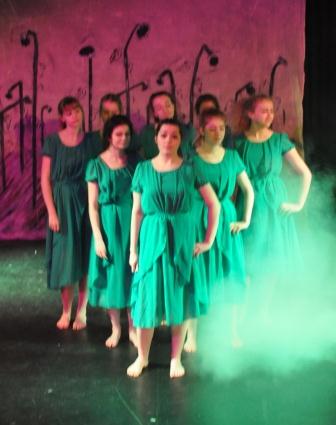 Best Theatre Arts of St Albans has been selected from nearly 300 groups across the UK to perform their production of The Boy Preference at the National Theatre in July. This is a huge honour for Best’s youth theatre group, TheBYTE, and follows successful assessed performances at The Maltings and at the Royal & Derngate Theatre in Northampton.

“I couldn’t be more proud of our amazing, talented bunch of young people,” said Best’s founder and the play’s director, David Bevan. “The cast have worked so hard to create this eerie piece and it’s been a real team effort throughout. They deserve this opportunity of a lifetime to perform on the UK’s premier stage. They’ll knock the audience’s socks off!”

The play, written by up-and-coming playwright Elinor Cook for the long-running and dynamic National Theatre Connections programme; which annually invites 10 top playwrights and authors to compose new pieces for young people. The Boy Preference is a disturbing piece about a future society where the preference for boy children has got out of hand, but where the ‘girls-who-might-have-been’ return to exact a terrible revenge. “When I read the play it sent a shiver down my spine and I knew then we had to play this as a dark horror story,” says David. “Creating the mood and the world of the piece was my job; delivering the thrilling, terrifying performance was the job of our wonderful cast.”

The piece was co-directed by 16 year old Emily Webster of Beaumont School. “When I asked Emily whether she’d like to work with me on putting this show together I think she thought I was joking. But it was one of our key decisions and her work on the chorus elements of the piece was simply outstanding and mentioned in glowing terms in our assessment.”

Another important element, in David’s view, was the decision on music - “Our ‘DJ Alex’ Eales composes and mixes our soundscape live which gives the whole performance immediacy and edge.”

Now Best is being supported by a huge team at the National Theatre to help the transfer to the London stage and the plan is to hold a pre-transfer showing in St Albans in late June. “There are still things to work on and it would be nice to give St Albans the chance to see the show again before it transfers. In the meantime there’s loads to do, but I’m loving every second of it. Even old pros like me can still get excited about things like this. What an opportunity for Best and what an advert for the brilliant young people of St Albans and Harpenden!”

And the timing couldn’t be better as Best is recruiting a new group for our youth theatre to start in September from school years 7, 8 and 9 (ages 11-14). “If anyone wants to join our incredibly happy and talented bunch, we’d love to hear from you! No experience necessary and no auditions – it’s just great fun,” says David.

Best Theatre Arts of St Albans has been selected from nearly 300 groups across the UK to perform their production of The Boy Preferenceat the National Theatre in July.