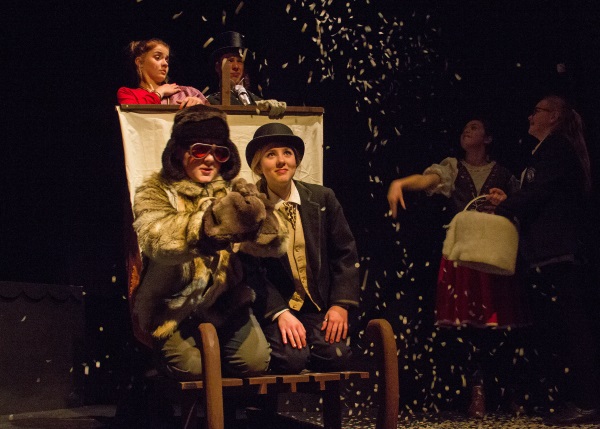 Adapted for the stage by Jules Verne in 1874, Around the World in 80 Days is an enduring tale of a lonely regimental gentleman who leaves the safety and comfort of his London town home to take on an adventure across the globe through which he enjoys life changing experiences and ultimately finds love.

Since the 19th century, Around the World in 80 Days has been a beloved book that has transitioned to stage, film, radio and animation. This year, the Lewes Theatre Youth Group’s Thursday drama group took on Laura Eason’s adaptation which was first staged at the St James Theatre in London’s West End in 2015.

“Produced at LTYG by directors Tim Rowland and James Firth-Haydon, Eason’s adaptation is a very clear, lively and accessible version of the 19C novel that maintains the Victorian eccentricities and period texture.

From the outset this was an assured, lively and engaging production with clever use of contemporary music underscoring the action. Precise and imaginative direction of the opening sequence where Phileas Fogg repeatedly begins each day with his obsessive habits made for a really engaging and comic start to the show.

The casting was very well executed with the actors demonstrating excellent control of their characters and fearlessly comical timing which collectively sense of industry, confidence and group cohesion. This production was an ensemble piece comprising so many imaginative set pieces played with gusto, bravery and admirable concentration involving the whole cast. Dancers, acrobats, and a host of approximately 50 characters were brought to life tirelessly with an infectious joy.

Tim Rowland’s inventive set provided many spaces and levels for the action and the work of the Lighting and Sound crew were intrinsic to the fabric of the show bringing to life the various worlds Fogg and his friends visit. Gerry Cortese and Alison Soudaine’s costumes were eye-catching and, as you’d expect, period perfect.

Many audience members praised how ‘slick’ the show was. In fact, I heard a number of people in the interval who were really impressed with the show saying they hadn’t realised, before coming along, that it was a youth theatre production.”

Tim Rowland and James Firth-Haydon wholeheartedly agree, “The entire youth group were excellent in working together and had such a great ensemble company feel. This year the youth members oversaw all set changes and stage management themselves and we are incredibly proud of this group and what they achieved and delighted to see some familiar faces return to see the show and enjoy themselves.”

On behalf of the Lewes Theatre Youth Group, the directors wish to thank everyone involved, including sponsors and supporters, Lucie Fitchett, the invaluable parents of the cast, Sue Tait and the Lewes Theatre committee, Lewes Tourist Information Centre and Viva Lewes for running our family theatre experience competition, as well as the local press and media.

Here's what the Viva Lewes competition winner said about their family theatre experience...

"We enjoyed a fantastic and very memorable evening, thank you for your generosity. As newcomers to Lewes Little Theatre we were really impressed and will definitely be booking for future shows."

Thanks also to all backstage crew who helped put this show together as well as the wardrobe team who did an excellent job of dressing all 26 members of the cast, the majority of which needed more than one costume for their multiple characters. The theatre’s Aladdin's cave of props and set accessories was also much appreciated, and also a big thank you also to Lesley Rowland who created the magnificent Elephant, Nelly.

Lewes Theatre Youth Group looks forward to announcing news of their 2018 major professional production in September 2017 at which point rehearsals will also begin following casting before the summer holidays begin. In the meantime, students will have the opportunity to take on a variety of roles in smaller productions hosted in May and July at the Lewes Little Theatre, including The Adventures of Jason and the Argonauts by Phil Willmott.

Children and teens are invited to enjoy a free taster session at any of the LTYG drama groups and to find out how to enrol, please email Tim Rowland at leweslittletheatreyouthgroup@gmail.com.