8 students from Dramawise took their LAMDA exams during the Summer term. All passing with 3 Distinctions one at Grade3 one Grade  5 and one Grade 6 with a bronze medal.

Dramawise students have just presented “Oliver”  at the junction theatre Cambridge, with excellent reviews.Please see below...

There is something about Lionel Bart’s ‘Oliver!’ that stirs the soul and makes the heart sing with its toe tapping numbers and heart-warming characters. I therefore settled myself into my seat at The Junction, Cambridge on a sunny Saturday afternoon confident I would be in for a treat and I wasn’t disappointed! 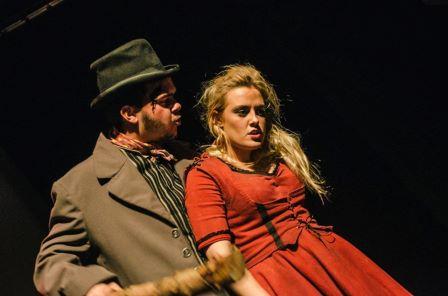 Locally based Sky Blue Theatre Company have a formidable reputation of putting on plays and musicals of a high standard and the cast, in the safe hands of veteran Director, Frances Brownlie were impressive, regardless of their role being large or small.

The simplicity of the set with its construction of a series of walkways, was effectively placed upstage creating a sense of Dickensian London and the variation of levels added visual interest. Internal scenes were suggested with benches for ‘The Three Cripples’, whilst formal chairs and tables suggested Widow Corney’s Parlour etc. I found the slow scene changes frustrating due to the time taken to shift the furniture at the end of one scene to another despite the musical interlude to keep the audience’s interest, with a loss of energy and pace.

Young; Will Lucas – Evan was a delightful ‘Oliver’ and the audience were rooting for him from his first appearance, endearing us to him with the sweet purity of his singing voice and his impressive acting skills, definitely one to watch for the future!

The children were clearly loving every moment of their time on stage, singing, dancing and acting their hearts out, cheered on by proud parents and grandparents, I suspect in the audience! 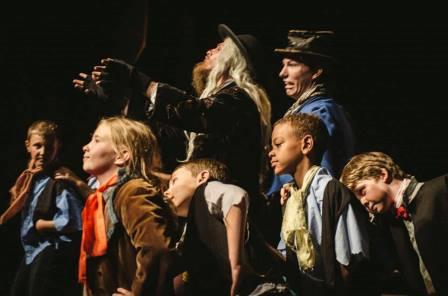 Heidi Meikle had us all laughing out loud in horror and delight as the formidable ‘Widow Corney’ who relished the misery she inflicted on Richard Sockett’s pompous ‘Mr Bumble.’ Max Reader’s ‘Fagin’ proved himself to be a highly skilled actor, embodying the vocal and physical attributes we associate with ‘Fagin’ and was a joy to watch!

From the moment she entered, Jasmine Linsdell was captivating as the troubled but lovable ‘Nancy’ and even with a noticeable sore throat, her rendition of ‘As Long as He Needs Me’ was haunting and heartrending.

Rob Brownlie who played ‘Bill Sykes’ was imposing as the violent bully but momentarily redeemed himself in my eyes, by scooping e sup the long - suffering ‘Nancy’ for a passionate kiss when he is reunited with her in ‘The Three Cripples.’ I always feel uncomfortable watching the scene where Nancy is bludgeoned to death for her betrayal to Sykes and the gang but I applauded the sensitive staging which captured the final desperate moments of Nancy without making it gratuitous.

There were so many other performances that also deserve a mention, from Mr and Mrs Sowerberry, Geoff Unwin’s kindly Mr Brownlow, the cheeky but likeable ‘Artful Dodger’ to the sterling chorus who brought the musical numbers to life and of course, Bill Sykes Dog who was played stoically by Kanda! The cast and crew excelled themselves and Frances Brownlie may have directed her ‘last big musical’ but my goodness what a final swan song, she gave us!