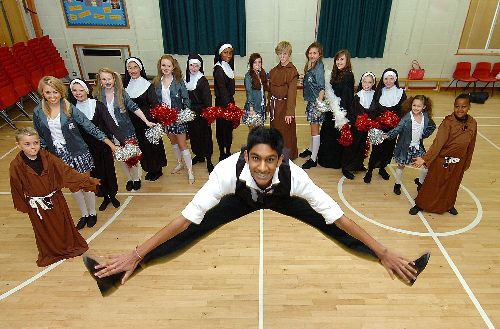 On Sunday 4th November 2012 a group of 18 Stagecoach CHERTSEY students (as seen in photos above and below) represented the school and performed in a very special musical celebration at one of London's most prestigious theatres, at Her Majesty's Theatre in the from 16 Stagecoach schools from around the UK.

In a packed evening's entertainment the show featured an eclectic mix of musical styles, popular shows and famous songs.

"I'd like to congratulate all the Stagecoach Chertsey students who performed in the heart of the West End. The theatre - currently home to the smash hit musical 'The Phantom of the Opera' welcomed to the stage students ach Chertsey students for their first class performance on Sunday 4th November at Her Majesty's Theatre and thank the teachers for their support and encouragement. Special thanks goes to Paul, our Singing teacher, and Tina, our afternoon Dance teacher as, taking as their inspiration the 'Sister Act' films and the iconic music of Tamla Motown, they worked with the students for 8 weeks during the lunch break and together created a performance piece designed to showcase the students skills in song and dance and even incorporated some character comedy!

As a Principal, I don't know what fills me with more pride, the fact that every student worked so hard in rehearsals and shone on stage or the way the students behaved at the event. I can honestly say the Stagecoach Chertsey students set an example at the event and cheered on the other schools that were performing, in the same way that our students support one another in session.

Thank you to everyone, including parents for their support and help in making Stagecoach Chertsey's FIRST appearance at Her Majesty's Theatre such a successful one - it will not be our last...!!"