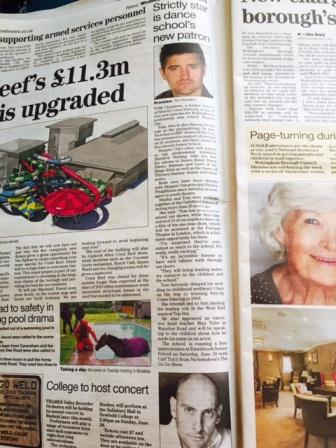 Top performing arts school “Steppin Out” really is the talk of the town at the moment!

Having secured two industry patrons and enabling its students to be closely mentored and supported as well as a filming job for 15 of its children and a string of children in west end shows “Steppin Out” is really carving quite a name for itself.

This month the school introduces actor Tom Chambers- ( Famous for winning Strictly Come Dancing and scooping an Olivier , Holby City, Waterloo Road and Top Hat the Musical) and Matthew Stirling- Professional Stuntman in Bond, Harry Potter, Zorro, Game of Throwns and Lord of the Rings as patrons to the school.

Steppin Out classes run on Fridays in Woodley and Saturdays in Wokingham To book your place please call Shelley on 07970 034488/ 01189 774258 or e mail shelley@steppinoutschool.co.uk HURRY as  places are limited!

Posted By Steppin Out Stars Of Tomorrow Theatre School Wokingham

News from Steppin Out Stars Of Tomorrow Theatre School

Here is a round up of our latest news.