WOAPA is a part-time Theatre School in Witney Oxfordshire for children aged 4–16 years from areas Faringdon, Witney, Burford, Carterton, Chipping Norton, Oxford, Eynsham, Woodstock and Abingdon, which operates at evenings and weekends during the standard academic term. Providing quality tuition in the three disciplines of Singing, Dance and Drama classes in Witney, our classes ensure that each child receives the individual attention they deserve.

*For children across all areas of Oxfordshire, including Faringdon, Burford, Carterton, Eynsham and beyond.

Our Performing Arts Classes in Witney are led by experienced and enthusiastic tutors whose skills in working with young people enable our students to develop at their own pace, and encour­age them to reach their true potential.

With no entry auditions or previous experience required, whether your child dreams of a career in performing arts or simply wants to make new friends, WOAPA will boost your child’s confidence … and they’ll have loads of fun!

We promote a positive environment - where students have fun as they celebrate their individuality and achievements.


Working as part of a team, students are encouraged to be creative and value the experience of working closely with others towards a common goal.

Skills are developed and refined, enabling students to become multi-disciplined, all-round performers. For our young performers (aged 4-6) all three elements of singing, dance and drama are combined in a weekly, 1-hour, fun-packed session.

We offer the opportunity for your child to stretch their imagination and nurture their social skills including communication and concentration.

Watch as your child develops…

WOAPA provides its own internal awards for achievement in class.

For those students wishing to undertake more formal assessments, exams are arranged for both LAMDA and Arts Awards.

Students and parents have exclusive access to a member’s-only area on our website, listing details of auditions, theatre trips, special events, and more! If you’re looking for drama activities for kids in the Witney area, WOAPA – West Oxfordshire Academy of Performing Arts is for you!

No auditions or requirement to read music, emphasis is on having fun whilst singing with like-minded people. The group currently meets in Witney on Wednesday evenings

We offer dance sessions for kids from Enstone, Eynsham, Faringdon, Fawler and Fifield as well as areas such as Filkins and Broughton Poggs, Finstock, Freeland and Fulbrook. WOAPA students may also come from Glympton, Grafton and Radcot, Great Tew, Hailey and Hanborough, as well as Hardwick with Yelford, Heythrop and Holwell, with Idbury, Kelmscott, Kencot, Kiddington with Asterleigh.

WOAPA is an independent Theatre School for children aged 4-16 years, which operates in Witney Oxfordshire at weekends during the standard academic term.

Our classes are led by experienced and enthusiastic tutors whose skills in working with young people will enable your child to develop at his/her own pace, and encourage them to reach their true potential.

Providing quality tuition in the three disciplines of Singing, Dance and Drama, our class sizes are deliberately kept small to ensure that your child receives the individual attention he or she deserves.

With no entry auditions or previous experience required, whether your child dreams of a career in the performing arts, musical theatre, or simply wants to make new friends, WOAPA will boost their confidence … and they'll have loads of fun! 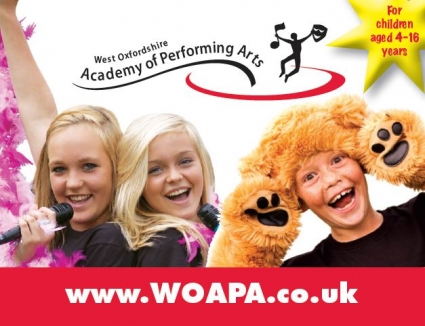 We have a vacancy for an additional dance tutor for our children's theatre school in Witney, Oxfordshire